Zach was a terrified dog. After eight months in a home, he’d been returned to the Lost Dog & Cat Rescue Foundation in Northern Virginia, in rough emotional shape.

He was throwing up every time he went into a car. He was scared of strangers and new environments.

Zach had come to Northern Virginia from a rural shelter, along with his brother, who showed no signs of this kind of fear, and was quickly adopted—an adoption that stuck.

But Zach wasn’t having it so easy. Luckily, that’s when Stephanie Ferri came into his life as his virtual foster—a volunteer role in which she is assigned to a specific dog at the shelter, to help them overcome behavioral challenges and learn to be comfortable in a world of humans, so they can be adopted into a home.

Lost Dog started its virtual foster program during the pandemic, for dogs who didn’t go immediately into foster. The idea was, with fewer people able to come into the shelter and fewer events, it would be good for the dogs to have one person who would be a consistent presence for them, coming in at least two or three times a week, and who would also act as their advocate.

The program has evolved to focus on dogs who, for example, are anxious, dog-selective, or have  “some mouthy behavior” and who would not be best candidates in a crowded adoption event, says Dawn Wallace, Lost Dog & Cat Rescue Foundation’s executive director—basically, for the dogs who could use some extra help and individual attention, from a dedicated person, to have their best chance at a good adoption.

This involves treats, training, sleepovers, and day trips (called DogVentures, by this organization). Virtual fosters also help with the marketing and adoption counseling process for their dogs.

Stephanie, who has worked with eight dogs since she began volunteering as a virtual foster about a year ago, has a type she especially likes to work with, and that type is fearful dogs like Zach. The scared, out of sorts ones who have been adopted and returned a couple of times; those are her favorites.

So Stephanie began visiting Zach at the shelter, with a snack. “I literally would go every day with chicken,” Stephanie says. “I started by sitting in his kennel trying to get him used to me. And then we gradually moved over to just walks. And then the car.”

Before long, Zach was taking drives around the parking lot, learning some new positive associations.

“Over the course of a month, month and a half, I was able to get him in the car where we’d go on a 30 minute drive,” Stephanie says. Zach only threw up once, the whole time.

He began getting used to meeting new people, through that period, too—advancing from the “restricted” list for dogs who can only be walked by certain people, to being walked by any volunteer. “He was making a lot of progress. And we were like, all right, we’re going to make him available for adoption,” says Stephanie.

For example, at the ​​Watauga Humane Society in North Carolina, virtual fosters take dogs on doggie day out adventures. Part of their job is to come back with observations about the dog’s personality and behavior, and another part is to “become the community ambassador for their pup by posting on social media, advocating for adoption, and by spreading awareness through in-person interactions,” says the director of operations and animal welfare Ashlee Yepez.

For Rugaz Rescue, on the west coast of Florida, virtual fostering is primarily a sponsorship program for hospice dogs. “Just because you can’t have a dog in your home, doesn’t mean you can’t still help the dogs of Rugaz Rescue,” says Devilyn Rugaz, the organization’s founder. Virtual fosters get “pup-dates” on their sponsored dogs. Those who are local “can make appointments to take their foster pups on day trips, or come over and spend some time with them if they are homebound dogs.”

Austin Pets Alive!, meanwhile, has implemented a new volunteer program called Flight Paths, designed to give the APA! animals most in need of assistance their best and most immediate chance at securing a foster or adoptive home. Teams, called Flight Crews, are created around each of those animals to ensure they develop the life skills they need to be successful in homes; create and distribute marketing and promotion materials; develop intimate knowledge of their histories, behavior and medical challenges; prevent psychological and physical decline by looking out for their health, safety, and emotional well being; and field inquiries form potential fosters and adopters. (To learn more about Flight Paths, check out this 11-minute video presentation.)

With 50 volunteers working with 55 dogs and securing 37 placements since the program’s inception earlier this year, Lana says, “it’s a safe bet that a dog with a team of people working on everything from the dog’s mental health to training to promotion to enrichment is going to get placed more quickly than a dog without one.”

Kelly Duer, senior outreach specialist for Maddie’s Fund, is also a fan, and glad to see more organizations setting up virtual fostering programs. “Volunteers have been advocating for their favorite pets all along, but pairing pets and people in a structured way helps to ensure that pets don’t fall through the cracks,” Kelly says.

What should shelters and rescue groups keep in mind, if they want to start a virtual fostering program of their own? We’ve got some tips for you!

This brings us back to Zach. When we last left him, he’d been working with Stephanie for about two months—eating lots of treats, becoming comfortable around people, getting comfortable in the car.

Then his adoption listing went online. The family who adopted his brother happened to see it, and reached out.

“They had no idea that the two dogs were related. They just saw a dog that had the same age and was from the same rescue,” says Stephanie.

They arranged a meet and greet. Stephanie isn’t sure if it’s just wishful thinking, but she thought she heard Zach cry, in a good way this time, as the family’s car was pulling up. Zach and his brother seemed to recognize each other instantly.

Zach got adopted. In fact, he was adopted exactly one year after his brother; they have the same gotcha date.

He has been in his adoptive home for a little over a month. Stephanie, who is now co-virtual fostering three more dogs, has stayed in touch with Zach’s adopters. They tell her that Zach is doing well, that he is enjoying living with his brother. He is there, happy and loved in this home, with his brother and his people, because she took the opportunity to be his virtual foster.

“To see this dog that was so fearful, be able to conquer his fears—and me getting to help him conquer those fears so he could find this family. So things happen for a reason,” says Stephanie. “It’s my favorite story, and he’s been my favorite dog,”

Do you have an idea for a Steal This Idea blog? Let us know at marketing@americanpetsalive.org! 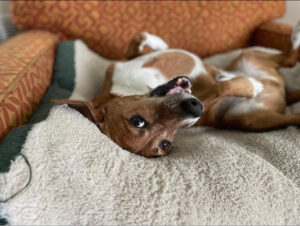 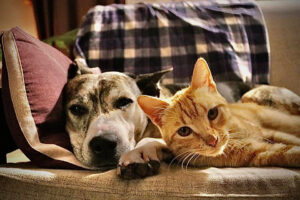 Animal mutual aid is when people get together to meet each other’s pet-related challenges. Here’s how your organization can make it easy for people to step up for one another.