Not All Pets’ Owners Have Cars. These Free Pet Ambulances Will Get Them to the Vet

For years, the nonprofit Lollypop Farm in Rochester, New York, has been transporting owned pets to the vet when their owners otherwise had no way to get them there.

Until recently, they’ve been doing it on an ad hoc basis. A few months ago, the organization decided to make this an official service offered to the community.

Funding comes out of the operations budget as part of the HOME program, a whole panel of services and resources to help keep pets and people together like a pet pantry and behavioral helpline.

No one should be faced with having to give up a pet, because they don’t have access to veterinary care.

That includes making sure pets can actually physically get to the vet—or the vet can get to them.

That’s why KC Pet Project, a nonprofit that has the government contract for animal control services in Kansas City, Missouri, recently set out to raise $50,000 to be used, in part, for a mobile medical van that will bring veterinarians to owned pets and owned pets to the vet as part of their Healthy Pets KC initiative.

Tori Fugate, KC Pet Project’s chief communications officer, says the van was inspired in part by an increased number of animals coming into the shelter this year, even with the safety net programs—which has led KC Pet Project to focus even more resources on helping pets stay in their communities.

With the Healthy Pets KC van, veterinarians will be able to go to see pets in their homes, for exams and some procedures. It will also be able to be used to bring pets to the shelter’s veterinary clinic.

KC Pet Project is already doing this for some families—like with Red, the dog who was featured in the Giving Tuesday campaign.

Red is an owned dog, who had a big mass on his neck. Concerned neighbors called KC Pet Project about the dog. When the shelter’s veterinary team went to check on him they discovered he did need surgery.

The van will allow more pets to receive more care—which will, in turn, keep more pets with their families and out of the shelter.

Leanna Taylor, executive director of the Arizona Pet Project, says providing pet ambulance services has been an important part of her organization’s mission for years.

Arizona Pet Project is an “intervention agency,” as Leanna puts it, aimed at “keeping families together, safe, healthy, happy, and keeping pets out of shelters.”

The organization does not operate a shelter, but fully focuses on supporting Phoenix-area pet owners—whether they are poor, undocumented, domestic violence survivors, medically fragile, unhoused, or in any other circumstance where they might need help caring for their animals.

Helping owned pets receive vet care is a big part of what Arizona Pet Project does. Transportation is a key part of that.

Leanna uses the term “pet ambulance” but makes clear: it’s not just for emergencies. Or even just for getting to and from the veterinarian.

“We have on occasion also provided transportation in emergency situations to domestic violence shelters for women who needed to get out of that situation,” Leanna says.

So how does a pet ambulance service actually work? For KC Pet Project, the van will make logistics pretty easy to navigate.

Leanna says Arizona Pet Project staff, including their social workers—stay tuned for a future Steal This Idea on animal welfare organizations with social workers on staff—have the Uber app on their phones, and access to a corporate account they can use to secure a ride for any client whose pet needs it.

The cost, she says, is not significant. Arizona Pet Project helps about 4,200 families per year, with a budget of “about $1.75 million,” Leanna says. The pet ambulance “ends up being just a few thousand dollars of our overall budget.”

Lollypop Farm, too, is signing MOUs with ​​Uber Pets and On the Move to get the pets to and fro. If your organization doesn’t have a van, or volunteers ready to drive, Caitlin suggests reaching out to local transportation services to “see what they are willing to help with.”

A handful of families have used the Lollypop Farm pet ambulance service so far. Caitlin expects that number to grow, by a lot.

One of the first is Fluffy the dog, whose owner Patti needed to get her to the shelter’s vet clinic “ASAP due to a pyometra,” Caitlin says. “We used Uber Pets to get her to our clinic for treatment and Fluffy was able to go back home with her loving mama.” 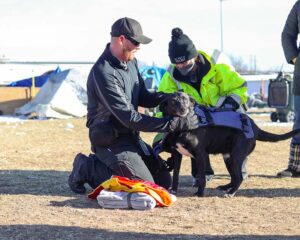 You want to keep people and pets together through crises, preserving families and keeping pets unnecessarily out of shelters. Here are 14 ways to do just that. 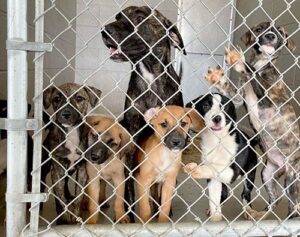 America’s Animal Shelters are in Crisis. 6 Things You Need to Know

A full shelter, a bare-bones staff, and fewer people coming to adopt add up to a perfect storm for pets who end up in the shelter.