What is the Human Animal Services Support project?

Our mission is to collectively build community-focused animal services that better meet the needs of animals and people by keeping human-animal families together and keeping pets unnecessarily out of shelters.

In this world, animal services agencies assist the majority of pets without separating them from their families or communities. We are doing this through partnerships and collaboration, innovative programs and solutions to support people and pets, and engaging communities.

In a time of great challenges—in animal welfare, and beyond—HASS provides a collaborative, community-centric path for preserving families and saving animals’ lives.

If the HASS project is successful, animal services agencies will work first and foremost to provide support to families in order to keep people and pets together. Reuniting lost pets back with their families is a top priority.

The majority of pets who enter the shelter system are placed in foster homes within hours or days of arrival and foster pets are adopted directly from their foster homes. The only animals in the physical shelter, are those who truly need to be there

Shelters will act primarily as a resource center for people and pets. Euthanasia for space will be a thing of the past.

Separating animals from their homes and communities will be the last resort, instead of the first and often only solution presented.

What does that mean for animal services organizations?

Our mission is to collectively build community-focused animal services that better meet the needs of animals and people by supporting families, pets, and communities with programs and resources that keep families together and pets unnecessarily out of shelters.

We expect the culture within animal welfare to change so the starting point of all activities in animal welfare organizations is to ask, “How do we maintain and protect this bond between humans and animals?”

With this model of animal services, people and pets stay together, preserving the human-animal bond. Fewer pets enter the shelter when they don’t have to. And more lives are saved.

Is there a role for rescue groups in the HASS model?

Yes there is! Rescue groups play a critical role in community-focused animal sheltering, and we include rescue groups among our HASS partner organizations.

The HASS model provides better, faster communication between the municipal shelter and rescue groups. Rescues are alerted of pets in need before or at the time they enter a shelter, so pets are able to get into foster homes quickly and efficiently—in some cases, without ever entering the shelter system at all.

An increasing number of rescue groups are also providing urgently needed services like safety net fostering, pet food donations, facilitation of medical care for owned pets, and others that preserve families and keep pets in their homes.

Can we really house most pets in foster homes instead of kennels in the shelter?

We really can. Foster-centric sheltering means the shelter prioritizes fostering just as much as adoption. The majority of pets who enter the shelter system are placed in foster homes within hours or days of arrival and foster pets are adopted directly from their foster homes.

During the first year of the pandemic, we learned about the power of foster to fundamentally transform our organizations. Remember when shelter after shelter showed photos of rows of empty kennels, because most or all pets were in foster homes?

We learned that foster care works as the primary way to house pets, and that pets, communities, and organizations are stronger when the majority of animals are housed in homes, and out of the shelter.

This lesson is necessary, and urgent. Even in the best circumstances, animal shelters are stressful places for pets. Animals housed in kennels are susceptible to catching contagious illnesses and experiencing kennel stress and behavioral decline. Additionally, housing animals in kennels for weeks or months is expensive and time consuming for staff and volunteers. A foster home is the ultimate, low-stress environment in which to care for shelter pets.

Foster care saves lives, eliminates euthanasia due to lack of space and capacity issues, and gets more animals out of the system alive.

What does lost pet reunification look like in the HASS model?

Reuniting lost pets with their families is a top priority. To do that, we need to stop rounding up loose pets and bringing them to the shelter where they are unlikely to be reunited with their families, and instead, try to keep them in the communities where they were found so they can get back home.

The typical reclaim rate is only 17% when a pet comes into the shelter. But when a pet stays with a finder in the neighborhood where they were found, that reclaim rate jumps to 70%.

That’s because most lost pets don’t wander very far from home! They have a higher likelihood of being reunited with their family if they have a safe place to stay in the neighborhood they were found for just a short period of time.

That absolutely does not mean leaving lost dogs to roam freely! (It’s different for cats, unless they are sick, injured, or in danger.) People who find friendly, healthy pets are asked to hold them for a short period of time while making efforts to get the pet home without them entering the shelter, such as by posting a found pet report, posting the pet’s picture on Nextdoor and other social media platforms, and having the pet scanned for a microchip at a veterinarian’s office or by a field services officer.

Animal services organizations should support these reunification efforts by providing food, supplies, and other help such as posting on social media. Ideally, they will also have lost and found coordinators on staff or as volunteers.

These new ways of reuniting lost pets with their families are very important because most lost pets aren’t very far from home. One animal shelter found 85% of lost pets held for 48 hours were returned home. Only 26% of pets taken directly to the shelter had that same outcome. A 2020 study out of Dallas found nearly half of “stray” dogs were a mere 400 feet from home and almost all were within a mile of their houses.

No one is required to temporarily care for a pet they find, if they can’t or even just don’t want to. Animal services organizations will continue to perform all responsibilities. That includes picking up, and taking in, lost and stray animals.

We are very excited about getting more lost pets back to their homes, where they belong!

How do field services and public safety work with HASS?

When you hear the term “animal control officer,” you might picture someone who knocks down doors, issues citations, and takes people’s pets away. That’s the old way.

Under the HASS model, animal protection officers and field services professionals support people and pets in their communities by getting lost pets back to their families, helping sick and injured animals, providing pet food and supplies, connecting families to pet services, and more.

Often working side by side with social workers, nurses, and case managers, they provide support, information, access to care, and resources to the community, with the aim of keeping pets with their families where possible while ensuring the pets are safe, healthy, and well.

Communities are stronger and safer when pets and families are provided access to support.

Organizations may like many of these ideas, but might not have the staff or budget to make expensive changes. Is there a way for shelters to be a part of this initiative?

Absolutely! HASS partner organizations range from small, rural animal services with fewer than ten staff members, to some of the nation’s largest, most supported organizations.

It is completely free to join HASS.

The HASS project will help you learn how to build transformative foster, volunteer, and pet support programs while preserving your precious financial and human resources. One of our primary goals is to create programs and solutions that can be replicated in communities everywhere. These programs are cost effective, and many won’t cost an extra cent.

When you join the HASS initiative, you and your organization will have a chance to connect to others doing similar work through our working groups and Job-Alikes. You will have total access to our toolkits, webinars, leadership calls, blogs, self-paced courses, and many other resources.

Together, we are creating a new world for animal services. One that is humane, cost effective, and collaborative, preserving and honoring the human-animal bond, and saving animals’ lives. The HASS project includes you! 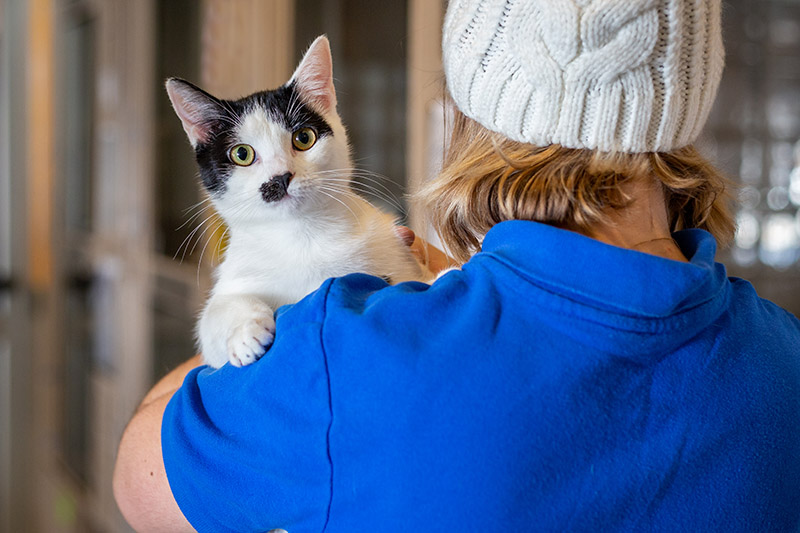