Like so many shelters, SPCA Serving Erie County in West Seneca, NY, is having a difficult time getting and staying staffed.

With a lot of open positions to fill, and the usual recruitment techniques proving inadequate, director Caitlin Daly had an idea: What about holding an open interview event, for anyone interested in working for or learning about the organization?

So on May 12, they did just that—and then hired about 10 of the 80-some people who showed up that day. Relationships were built with others of the applicants, some of whom are starting as volunteers. Local news even did a story about it!

“We busted our doors wide open and welcomed everyone, because that’s what we should all be doing every single day,” Caitlin says.

We first learned about the open interviews when Caitlin posted about them in the American Pets Alive! Shelter and Rescue Support Facebook group. (If you haven’t joined the group, do it now—it is a great resource.)

Well we obviously had to learn more, and Caitlin enthusiastically spoke with HASS about why and how SPCA Serving Erie County held these open interviews, and what other shelters can learn from their experience.

This interview has been lightly edited for space.

Caitlin Daly: I’ll start with the second question. We only have one HR individual, and it was a bear to recruit and interview. It seemed futile with all of the open positions. Almost every department was short-staffed, and we were heading right into kitten season.

The idea was born out of necessity and desperation. What a great way to get as many candidates in front of us as possible with little work on our end. We made it a fun day for all with swag items and food.

HASS: How did you get the word out?

Caitlin Daly: Social media channels and word of mouth. We created flyers that we handed out, and we mentioned the event on radio spots. A local news station picked it up because they thought it was cool, also! 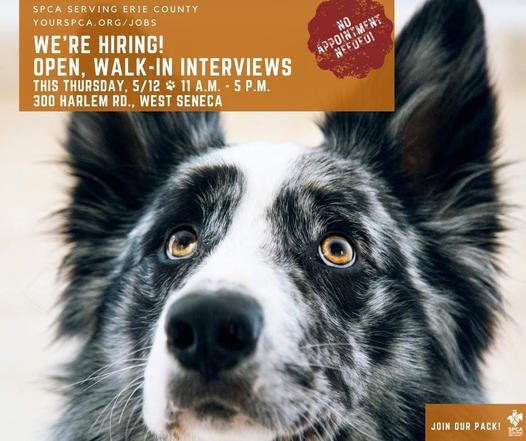 HASS: What positions were you looking to fill? Were you having a hard time filling them before this event?

HASS: How did you actually run the open interviews? Did people just show up and then you’d interview them on the spot? Did they know what positions you were hiring for?

Caitlin Daly: The event was from 11am-5pm. My puppy Roux was the welcoming committee, and it was cool to see how folks interacted with him. Did they feel comfortable around him? He can be a lot.

We did have water and snacks available. We printed out job descriptions for all open roles and allowed people to self-select based on interests and skills.

We had about 6 or 7 folks from various departments available to interview, and it didn’t matter which department the person was interested in. We had one set of questions for everyone that focused more on culture, since skills can be taught.

We made it fun and engaging by having the dog, by being open and friendly, and by getting people in and out quickly. Interviews lasted 10–20 minutes each, max.

HASS: Did you find that different people showed up for the interviews than what you’d expect if you hired in your usual way? Did this broaden your pool of applicants?

Caitlin Daly: We saw a completely different demographic and it was awesome! People showed up authentically, as opposed to the veneer that guards applicants in most job interviews. It was such a fantastic experience!

We had people from all backgrounds, cultures, and ethnicities. We had folks who were differently abled and those who didn’t think they had the skills required to work with animals, not realizing those are things we teach.

We do minor background checks but we do not drug test or require a certain level of education for most roles. Our brand new behavior director actually came on with no formal dog or cat behavior certifications and she has been super. I find that hiring for culture is the way to go.

HASS: Did you hire people on the spot, or was it the usual timeline?

Caitlin Daly: The process was expedited.

HASS: What went well at the open interview, and what would you do differently next time?

Caitlin Daly: I would do it the exact same way. We are talking about doing it quarterly to replace traditional hiring

HASS: Did you make any hires out of the open interviews? Are they people you think you might not have hired otherwise?

Caitlin Daly: Yes and YES! We hired almost 10 people and held onto every single application.

Some folks are going to start as volunteers. I’m also thinking about seeing if the candidates mind that I share their resumes with other local shelters and nonprofits who are hurting.

HASS: Do you think this only works for nonprofit orgs, or could this type of interviewing work for government shelters, too?

Caitlin Daly: I’m sure some places—government, mostly—have restrictive hiring practices that would preclude this. I would recommend this practice, however, to anyone.

HASS: What recommendations would you have for other orgs that want to try this out?

Caitlin Daly: Just be open and friendly. We turn people off in so many ways in this industry through restrictive adoption practices, by turning away people when they need us via punitive animal control officer methods.

We busted our doors wide open and welcomed everyone, because that’s what we should all be doing every single day.

More pets get lost on July 4th than any other time of year. Taking these steps will help get them back home.

Why Is It So Hard to Volunteer to Help Pets?

The reason animal shelter volunteer programs desperately need an overhaul, and 10 ways to fix it.